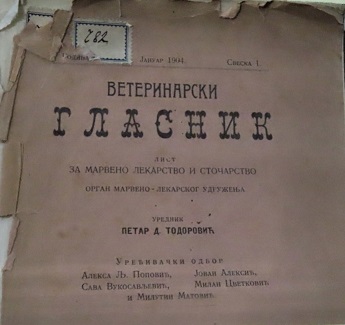 The Journal Veterinarski Glasnik was founded in December 1903 and the first issue was released in 1904, published by the Veterinary Association of the Kingdom of Serbia (Marveno-lekarsko udruženje Kraljevine Srbije). The Veterinary Association was established in 1890 with the aims of resolving technical and scientific issues in the field of veterinary medicine and animal breeding, as well as defending the interests of the profession. The first Editor of Veterinarski Glasnik was Petar D. Todorović (1854-1917).

From 1920 to 1941 in the Kingdom of Serbs, Croats and Slovenes and later in the Kingdom of Yugoslavia, it was published under the title of Jugoslovenski Veterinarski Glasnik and it was the Journal of Yugoslav Veterinary Association. The Editorial Board consisted of Aleksandar Petrović, Antonije Vuković, Anton Korošec, Vojislav Pavlović, Dragutin Pozajić and Nikola Vuksanović, and the Editor-in-Chief was Ćirilo Petrović. The Journal was, at that time, published once a month. The publication was interrupted only during The Balkan wars and First and Second World Wars and the post-war periods (1912-1919 and 1941-1946). Since 1947, the Journal came out again in the new Yugoslavia (under the same title, Jugoslovenski Veterinarski Glasnik, starting from number one). In the beginning, it was published by the Ministry of Agriculture and Forestry and in the period that followed, by the Association of Veterinarians and Veterinary Technicians of Yugoslavia.

The problems in publishing which emerged from the disintegration of Yugoslavia in the nineties of the last century were overcome in 1993 by the decision of the Faculty of Veterinary Medicine in Belgrade to take over publication of the Journal. This maintained the continuity of the oldest journal in veterinary medicine in this region. The centenary of the first issue was celebrated in 2004. The publisher of the journal today is the Faculty of Veterinary Medicine in Belgrade, but the Veterinary Chamber of Serbia as a co-publisher played a very important role in the publication of the Journal from 1993-2015. The Veterinary Chamber of Serbia was engaged in the editorial board, technical editing, proofreading, financial operations and expedition. From 2015, all these roles have been taken over by the Faculty of Veterinary Medicine in Belgrade. Over the past 60 years, Editors were Uroš Bratanović, Sava Mihajlović, Ljubomir Kozić, Djurdje Djurdjević, Božidar Marković, Zlatan Sinovec and Vitomir Ćupić.