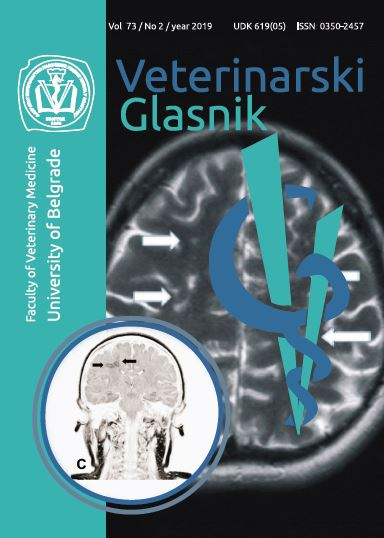 Introduction. The Nišava District has had low prevalence and incidence rates of trichinellosis for a long period. The aims of this study were to present the frequency of occurrence of trichinellosis in Nišava District and other districts in Southern and Eastern Serbia during 2007-2018, to investigate the demographic characteristics in the region and to compare the tests used for serological diagnosis of trichinellosis.
Materials and Methods. This was a retrospective epidemiological study in which we analyzed the results of serological analyses of 139 serum samples taken from individual patients suspected to be infected with Trichinella spp. Indirect immunofluorescence (IIF) and immunoenzyme (ELISA) methods were used for serological diagnosis of trichinellosis.
Results and Conclusions. Of 139 examined sera, 36 (25.9%) were seropositive. Most seropositive findings were encountered in 2012 and 2014 (in both these years, 12 sera were positive, i.e. 33.3% of the total 36 positive sera), when three minor outbreaks of trichinellosis were reported. Seropositivity was equally distributed according to patient sex and according to the district where they reported with illness. Positive serological findings were statistically significantly more common in hospitalized patients than in out-patients. Comparison of the findings with both IIF and ELISA test established the performance level of the tests, with the ELISA test being less sensitive than the IIF test. Immunodiagnostic procedures for the diagnosis of trichinellosis must be improved in view of the sporadic cases and minor outbreaks of the disease in the studied districts of Eastern and Southeastern Serbia.